Results of the 2019 EIA Study: An Opportunity to Reinvest and Fortify

Since 2008, our research team has examined the effect of economic shifts on the association sector in the Economic Impact on Associations (EIA) Study. Born out of a shared curiosity about emerging trends among organizations, the study recognizes the influence economic cycles can have on success. With our findings, we seek to provide insights about the evolving state of the economy and how associations can continue to thrive in everchanging conditions.

From the first installment of the 2019 EIA Study emerged the theme: An Opportunity to Reinvest and Fortify. Inspired by contrasting sentiments of association optimism combined with public uncertainty of the economy, our results pointed to resilience in the time of an unpredictable climate.

Although the economy is strong, the public mood indicates uncertainty over indefinite stability. This creates an opportunity for association managers to work toward crucial investments and consider how to shield themselves against an eventual downturn.

Broadly speaking, the current social climate of the United States is taking its toll on American optimism about the future. The majority of Americans are dissatisfied with current conditions, foreseeing a growing economic gap and greater political division on the horizon.

Yet despite negative perspectives, optimism still exists when it comes to the trajectory of the U.S. economy — which may be buoying consumer spending and activity. 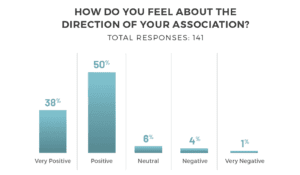 Internal factors within an association’s control — organizational strategy, strong executive staff leadership and a high-functioning board — were major influencers of such optimism. Expanding upon this vantage point, strategic planning was cited as essential to an association’s success. Participants noted the correlation between an effective strategic plan and an association’s ability to react and thrive during economic shifts. 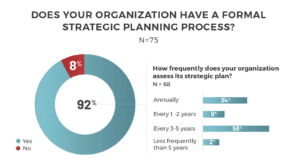 The strong optimism within associations inspired us to dig deeper into how this translates to membership results. Our findings indicate that retention rates have reached their highest mark in over a decade. Nearly half of all associations report rates greater than 90%, and only 17% report a decline in retention — the lowest reported decrease on record. 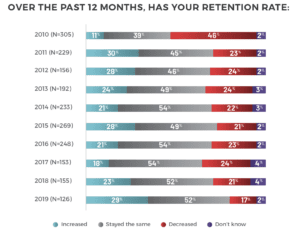 The impact of the government shutdown

During the 2019 government shutdown, associations across the country reported new and unanticipated challenges — from regulatory delays to declines in meeting attendance. But in the end, our results indicate that the shutdown had more of an impact on members than it did on associations. 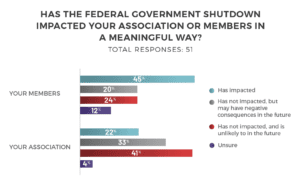 Several associations took direct action to support their members who were impacted by the shutdown. From extending deadlines for membership renewal and event registration to offering free access to online learning opportunities, they made several efforts to lessen the blow.

Though associations remain mostly unscathed, the uncertainty encompassing the government shutdown was a reminder to prepare for unanticipated challenges. Associations need to fortify their operations, finances and value propositions to navigate the possibility of the unexpected, whether it be a shutdown, trade tariff or another economic downturn.

Strength and resilience for the future to learn more about the state of the association industry.

The first part of this year’s EIA Study underscores the need for resilience and readiness to navigate the uncertainties to come. In 2019, many associations remained optimistic despite the rocky climate of the U.S. market, solidifying that their performance is dependent upon more than the economy. Instead, it largely relies on the collective confidence in strategy and leadership. Despite looming shifts and unpredictable economic disruptions, reinvestment and fortification in each of these areas is critical to the success and longevity of the association landscape.

Download the 2019 EIA Study, Part I to learn more about the state of the association industry.

Plus: stay tuned for the release of the 2019 Economic Impact on Associations Study, Part II this fall when we take a deeper look at common, effective strategies to increase engagement and loyalty.

More Posts from our Expert Advisors

Is the Fear of Failure Holding Your Organization Back?

How Cross-team Collaboration Sets the Stage for Strategy Implementation Success